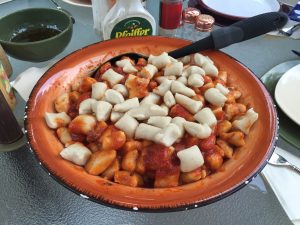 In our family, on your birthday, you get to pick the dinner entree. Regardless of the variety of restaurants or other family recipes, I never recall *anyone* *ever* requesting anything except gnocci. At one point, we just stopped asking 😉

First, it’s “ynoh-key”. The first part is a “eeenyoh,” except without the ‘eee’. It can also be said “ynuk-key”, the first syllable of which is the staple “ynuk ynuk ynuk” of Three-Stoges fame. It’s hard to get right; little kids in our family say “yuk-eees”, but they *know* they’re not yucky. 😉

Second, a warning. These little devils sop up water like nobody’s business. If you drink a tall glass while you eat, you WILL get a stomach ache. Drink before you eat, and sip while you eat.

Third, another warning. These are notoriously hard to make. This recipe is from my father’s family, and they say that if you make them wrong they stick together in the pot and make one big “gnocckle” (rhymes with ankle, but starts with the ynuk sound).

UPDATE: my brother had some inspired tricks this past year. His cooking tricks usually frighten me, as they often involve spice roulette or somesuch variation. This one is a shortcut, and it works REALLY well. I’ll present that as the basic recipe, and not where the original methods diverge as side-notes.

They freeze OK, but not very long (a few weeks), due to the potato content.

WARNING: do NOT overmix. they’ll turn into bubblegum. do NOT add water; more bubblegum.

Here’s the fast way, due to my brother’s trick:

Poke the potatoes with a fork so they don’t explode in the microwave, then cook in the microwave until fully-cooked. This will take a while, around 3 minutes for each potato. You can do them in batches, but turn them as they cook; you don’t want overcooked spots.

NOTE – you don’t need to have them completely cooked when the come out of the microwave; they’ll cook a minute or two after they’re out anyway, so go easy.

Slice the potatoes in half, and place each half, one at a time, cut side down into the ricer or strainer. Push through. note – this may squirt HOT potato out the sides, so go slowly at first. do this onto a clean counter – wood, glass, metal, stone, etc. don’t try it into a bowl; you want to let the steam rise out of the riced potato. as you go, spread out the mixture to dissepate the heat and steam.

THIS IS THE TRICK! no need to peel the potatoes. doing them in the microwave keeps things dry, and lets the water out. The old way was to peel and quarter the potatoes, and cook them in salt water. then you had to strain the water out, and steam the potatoes in the pan to drive out some of the water they absorbed – which made a crusty mess on the bottom of the pan, and took forever. you still ended up ricing the result.

DO NOT OVERMIX. mix gently. once the mix comes together, STOP. Avoid adding extra flour.

Cut off chunks, and roll to around the thickness of a think magic marker (1/2-3/4″ diameter). Cut into little chunks that are basically square (same thickness as diameter).

As you roll it out, you can dust the outside with some flour, but at this point USE DUSTING FLOUR SPARINGLY!

My father used to slice the chunks off with a knife, and flick the cuttings through some dusted flour to the right of the cutting area, which rolled the chunks just enough to cover the cut edges.

Place on cookie sheets lightly dusted with flour. Don’t try to use waxed paper – it won’t help here. You can freeze the sheets, which will make the gnocchi come off more easily.

Cook in LOTS of salted water. Once they float, they’re done. Do NOT overcook.

When you take them out, drain in a colendar – do NOT rinse. Toss with some spaghetti sauce or they’ll stick together!